Rogue One - The Daring Mission Has Begun

SAN FRANCISCO, CALIF. (August 15, 2015) - Lucasfilm announced today that their first film in the new standalone Star Wars stories series, Rogue One, has begun principal photography. Gareth Edwards (Godzilla, Monsters) is directing Rogue One, which tells the story of resistance fighters who have united to steal plans to the dreaded Death Star. The film is produced by Kathleen Kennedy and is slated for a December 16, 2016 release. 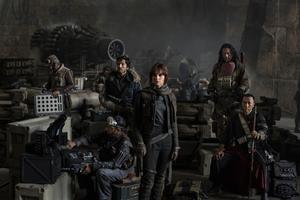 The filmmakers have assembled a stellar cast, including Felicity Jones, nominated for an Academy Award® for her leading role in The Theory of Everything; Diego Luna, who was featured in 2008s Oscar®-winning Milk and the critically acclaimed Killing Them Softly; Ben Mendelsohn, recently nominated for an Emmy® for his leading role in Bloodline and co-starring in the upcoming Mississippi Grind; Donnie Yen, Hong Kong action star and martial artist who starred in Ip Man and Blade II; Jiang Wen, who co-wrote, produced , directed and starred in the award-winning Let the Bullets Fly and Devils on the Doorstep; Forest Whitaker, recently featured in the critically-acclaimed Lee Daniels The Butler and winner of an Academy Award® for his leading role in 2006s The Last King of Scotland; Mads Mikkelsen, who starred in The Hunt and was the memorable villain from 2006s Casino Royale; Alan Tudyk, who plays a performance-capture character in Rogue One, stars in the soon-to-be-released Con Man series and Trumbo, which releases this November; and Riz Ahmed, who was recently featured in Nightcrawler and starred in the BAFTA-winning film Four Lions.

Rogue One takes place before the events of Star Wars: A New Hope and will be a departure from the saga films but have elements that are familiar to the Star Wars universe, says Kathleen Kennedy. It goes into new territory, exploring the galactic struggle from a ground-war perspective while maintaining that essential Star Wars feel that fans have come to know. Gareth is such an innovative director and Im so excited to be working with him and the extraordinary ensemble cast hes selected for Rogue One.