A species of shaggy domesticated pack animal. A jerba has a piglike snout, elephantine body and tail, and spindly legs with grey, leathery hide. The torso is covered in matted dark brown fur. At least two jerbas were visible in Mos Eisley near the cantina where Obi-Wan Kenobi and Luke Skywalker bought passage to Alderaan [ANH]. The mounted head of a jerba decorated one side of the alcove where Han Solo's frozen form was kept in the palace of Jabba the Hutt [ROTJ].

Jerba waiting outside a cantina, at extreme left of the picture, near a dewback. [Star Wars Trilogy Scrapbook: The Galactic Empire 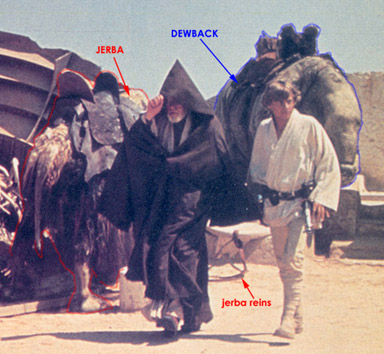 A jerba (outlined in red) standing beside a dewback outside a Mos Eisley cantina. [Star Wars Technical Journal #1] 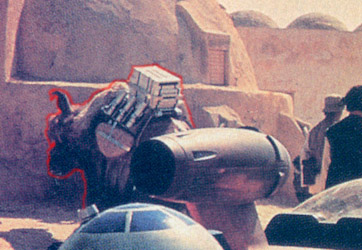 Another jerba, standing on the opposite side of the plaza outside the cantina, beyond Luke Skywalker's landspeeder. [Star Wars Technical Journal #1]

This page was constructed and is maintained by Curtis Saxton.
This page is neither affiliated with nor endorsed by Lucasfilm Ltd.
Images included in or linked from this page are copyright Lucasfilm Ltd. and are used here under Fair Usage terms of copyright law.
This site is kindly hosted by TheForce.net.